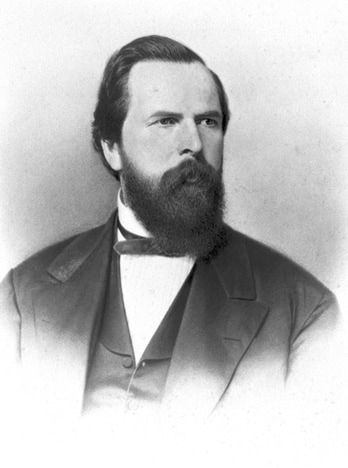 John Bidwell
In 1841 at the age of 22, John Bidwell became one of the first pioneers to cross the Sierra Nevada to California.  Bidwell became deeply involved in the development of his adopted state, its agriculture and what is now the city of Chico.  By the 1850s, Bidwell had purchased more than 30,000 acres.  He then built a General Store, a Hotel, a Post Office, and a Flour Mill.  In 1860, Bidwell helped lay out the town of Chico, which he named.  Three years later, Governor Leland Stanford made him a Brigadier General in the California State Militia.

A Proud Californian
During his early days in California, Bidwell served as business manager for another well-known California Pioneer – John Sutter.  Bidwell personally carried the first gold discovery near the Middle Fork of the Feather River.  Acting as both miner and merchant, Bidwell used the Gold Rush to build his financial resources.  He used this money to further his new state in the agricultural and public service arenas.

A Great Statesman
From 1865 to 1866, Bidwell served California as its representative in the United States Congress.  In the House of Representatives, he was a member of the House Agricultural Committee and introduced legislation that led to the completion of the California and Oregon Railroad.  By 1870, the railroad's tracks ran through his Rancho and the town of Chico.

A proponent of higher education, Bidwell donated eight acres of his Cherry orchard  in the 1880s to a teacher's college called Chico State Normal School (later renamed California State University, Chico).  Bidwell died in 1900.  The Bidwells had no children, so Annie willed her home to her church to be used as a school.  The Normal School bought the Mansion in 1923.  The Bidwell's home was used as a dormitory and was later used as offices and classrooms before California State Parks acquired the Mansion in 1964.

Displayed in the fully furnished home are both original and period pieces, including Mrs. Bidwell's piano, local Native American baskets and the Bidwell's eclectic library.

An "Agricultural Eden"
Until his death in 1900, Bidwell worked to build an agricultural showplace.  Wheat and flour production enabled Bidwell to finance ventures in specialty crops.  He would harvest his gold medal winning wheat, grind it into flour in his mill and have the cook make it into biscuits the same day.  He called the results "up-to-the minute biscuits."

Native People
The Mechoopda, who spoke the Konkow language, lived on Little Butte Creek about 3 1/2 miles from what is now downtown Chico.  The land was abundant with plants and animals that allowed the Mechoopda to nourish their body and spirit.  Their skills at basketry enabled the native people to collect, transport, store and cook their food.

With the discovery of gold and the influx of miners and settlers, the lives of the native people changed forever.  An enduring relationship was established when John Bidwell was befriended by the Mechoopda after he purchased the Mexican land grant of Rancho del Arroyo Chico.  Most Mechoopda, as well as residents from other villages, moved to Bidwell's ranch, where they worked.

Today the Mechoopda people are a vibrant community and stewards of their ancestral land.