STORY OF THE BIDWELL MANSION

Thousands of visitors have enjoyed and appreciated the beauty that was created by the Bidwells.  Join them by visiting the Mansion today. 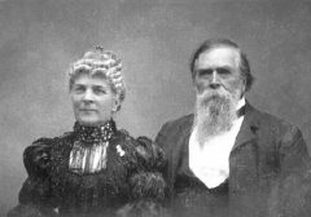 John and Annie Bidwell
Historic Bidwell Mansion stands today as a memorial to the Bidwells and celebrates, through their memory, those qualities of human mind and spirit of Enlightenment, Generosity and Concern for the well-being of humanity, that gave beauty, meaning and purpose for their lives.

Bidwell Mansion was the home of General John Bidwell (1819-1900) and his wife Annie Ellicott Kennedy Bidwell (1839-1918) from the time of their marriage in 1868 until the end of their lives.  Construction of the 26 room mansion began in 1865, prior to John Bidwell's first introduction to his future bride, which occurred late in 1865.  The Bidwells were married April 16, 1868, in Washington, DC., with then President Ulysses S. Grant among the guests.  During their courtship the Bidwells planned the furnishings of the mansion as well as the finishing stages of construction.  Henry W. Cleaveland was the architect of the $56,000 house.

During construction, the most modern gas lighting, plumbing and water systems were installed, and every detail of hardware and handwork was meticulously finished.  The overall style of the three-story brick structure is that of an Italian Villa or Country Estate.  The mansion was designed in an informal, warmly romantic style that was further heightened by covering the brick walls with pink-tinted plaster and painting the wood trim a complementary brown tone.  The outside and inside walls are two thicknesses of brick with an air space in between for insulation.

Upon entering the mansion there is a very spacious hall, a formal parlor, dining room, library and the General's office.  The kitchen and laundry room are located in the rear of the home.  Surrounded by a balcony over the wide first floor veranda, the second story contains five bedrooms, two bathrooms with flush toilets and running water as well as servant's quarters with its own bathroom that also includes a flush toilet and running water.  The bedrooms also contained a separate sink with running water for convenience.  There is also a room equipped by Mrs. Bidwell in which she taught Native American girls to sew.  A ballroom and six additional guest rooms are located on the third floor which also includes a private office for General Bidwell.

All of the rooms are filled with furniture of the Victorian era; dark, gleaming wood polished to a high degree, with many tables topped with marble.  There are off-white lace curtains and wall-to-wall carpeting, together with marbleized slate fireplaces, complete with decor.

The Bidwells were known for their gracious hospitality and the mansion was used extensively for the entertainment of friends, family and special guests.  Some of the special guests included President and Mrs. Rutherford B. Hayes, General William T. Sherman, Susan B. Anthony, Francis Willard, Governor Leland Stanford, John Muir, Asa Gray, and Sir Joseph Hooker.

Under the terms of her will, Mrs. Bidwell bequeathed the mansion and surrounding grounds to the College Board of the Presbyterian Church of the United States of America for the establishment of a coeducational Christian school wherein the Bidwell values would continue to be taught to successive generations.  However, the church found it impossible to establish and carry on such a school, and in 1923 the property was acquired by the Chico State Teachers College (later California State University, Chico).  In 1964 the California State Park System gained possession of the mansion, designating it the Bidwell Mansion State Historical Monument, later changed to Bidwell Mansion State Historic Park.